Pascale Berthiaume has been in a 3-year struggle over provincial regulations of dairy products that have almost killed her prosperous little business.
By Peter Simpson / Photography By Amy Zambonin | July 08, 2021
0 Shares 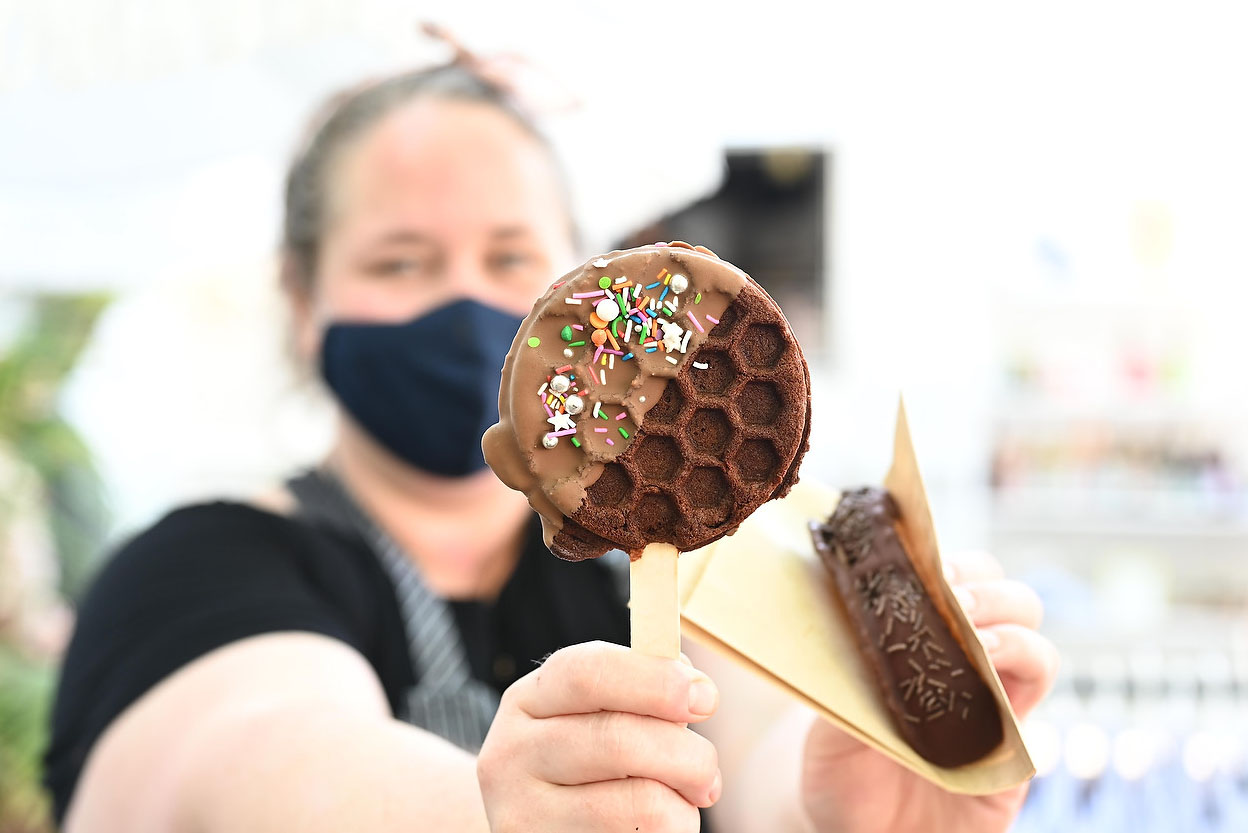 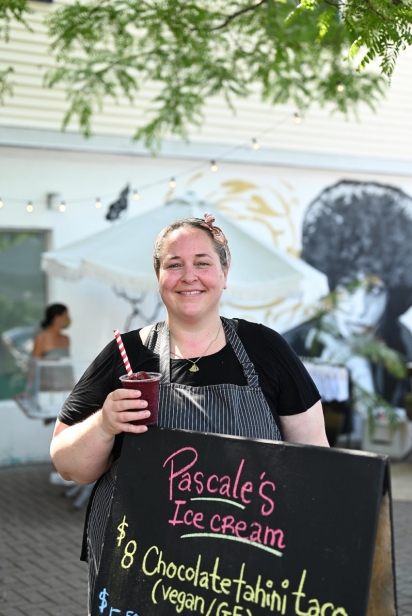 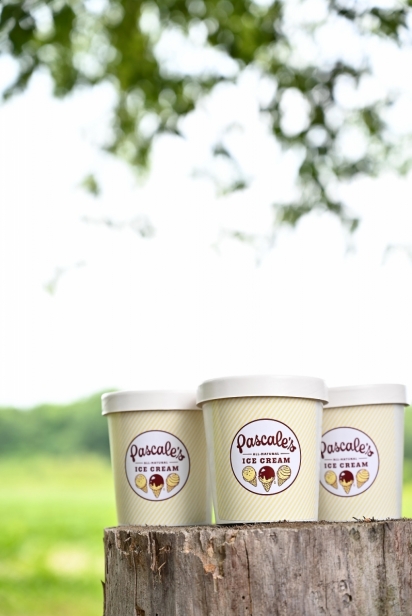 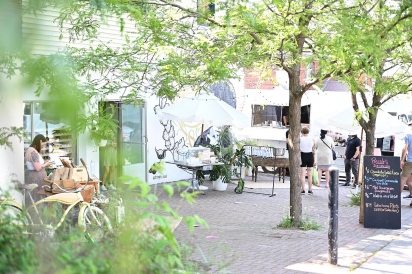 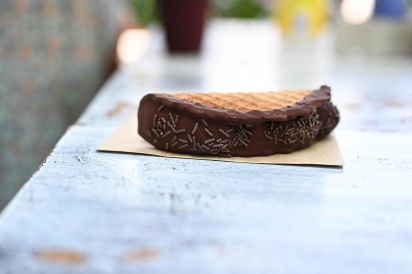 We all scream for ice cream, the old ditty says, though we’re usually not screaming in frustration. Ottawa’s Pascale Berthiaume is into year three of a struggle over provincial regulations of dairy products that have almost killed her prosperous little business, Pascale’s All-Natural Ice Cream. The rules didn’t force Berthiaume into a mere re-churning of her business plan, it forced her to throw the baby out with the cow’s milk.

Berthiaume began making ice cream 13 years ago. She had been trained as a chef at the prestigious Corden Bleu school in Ottawa and had worked in notable restaurants, such as Beckta and the Wellington Gastropub. At the gastropub, she made ice cream. It was so popular that eventually she left to start her own ice-cream business, first in an incubator nook in the Piggy Market in Westboro and then in her own leased space on Gladstone Avenue. It was the former home of the Red Apron food shop, which moved into larger quarters just across the street.

Compared to the big ice-cream makers — the ones that Ontario’s dairy regulations seem to notably favour — Berthiaume’s business had small volume and a big reputation.

By 2014 she was declared “Ottawa’s queen of ice cream” by the Ottawa Citizen’s Laura Robin, who described Berthiaume’s ice cream bars in Pavlovian detail: “Malted chocolate ice cream centres made with milk chocolate, sea salt, cream, eggs and Ovaltine — dipped in milk chocolate mixed with coconut oil. Then rolled in sweet-salty beer nuts that Berthiaume makes by hand for Oktoberfest. Why ever not?”

On her website, Berthiaume says she aspires “to make the perfect ice cream” with “the highest butterfat cream” and natural and fresh ingredients, and a “creamy and chewy texture” that can only be hand- made. Her flavours were anything but usual, such as roasted strawberry and bourbon, or malted milk chocolate and sour cherries. She made a dark chocolate chèvre, with a touch of goat-milk tang, that was delicious enough to inspire near-fatal bouts of over-eating.

Her shop on Gladstone buzzed. She invested in equipment to make her ice cream and to serve the needs of her few “incubator” tenants, a clutch of other local producers of hand-made foods. She sold retail out of her little shop, but approximately 80 per cent of her business was wholesale, most of it a baker’s dozen or so of the city’s best restaurants.

The Ontario Ministry of Agriculture, Food and Rural Affairs had knocked on her door and shut her business down. 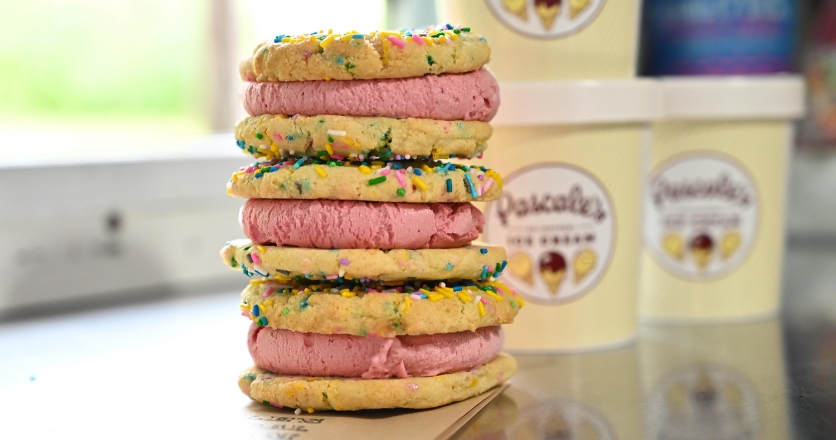 Dairy regulation in Canada
Dairy production is heavily regulated in Canada, starting with a contentious federal system of supply management. (“Detractors suggest it stifles free-market competition and inflates food prices for consumers,” the Globe and Mailwrote in 2020, “advocates say it ensures that Canadian producers aren’t flooded by cut-rate imports and they receive reliable, consistent prices for production.”) There are also regulations in each province, and Ontario built the legal and bureaucratic thicket that has entrapped Berthiaume.

After 13 years in business, OMAFRA declared that it was illegal for her to produce ice cream from cow and goat dairy, and if she did so, she could be fined $5,000 per day or be sent to jail.

It was March 2019, just before what would be another thriving summer season for Berthiaume, and she had tickets for a quick vacation in Bermuda.

There began her battle with a bureaucracy that she believes is indifferent to the plight of small business.

“You don’t drop a prison letter on somebody and then just walk away with no support,” she says. “I felt angry. I felt alone. They can freeze my bank accounts; they have all the power. It’s really scary.”

OMAFRA told her she could not produce cow or goat dairy products for sale by wholesale or even retail, and her business melted like a double-scoop left in the sun.

Her 15 wholesale clients — almost all of her existing business — dropped to two when Berthiaume informed them that she could now only make vegan ice cream or use sheep’s milk. Only the Red Apron and Suzy Q accepted her new products for sale in their retail fridges.

A few months later, in July 2019, OMAFRA informed Berthiaume that pending changes to existing rules, she could produce dairy products for retail sale, so long as the products had been “under your care and control at all times and sold and distributed only directly to the consumer.”

Berthiaume effectively had no retail business for dairy and couldn’t make it viable. She picked up some business with her non-dairy vegan and sheep’s milk ice creams, but revenues were low and she had to give up her kitchen and incubator space on Gladstone.

She supports the regulation of commercial food production, but like other critics, she’s baffled by what the laws are protecting — public health or the interests of bigger, richer dairy producers.

OMAFRA ruled that Berthiaume could legally and safely retail her dairy products from her shop on Gladstone Avenue (she took a chance and spent $30,000 to install a retail window), but those same dairy products were not safe to sell at any third-party location — such as farmers’ markets or food shops — unless she or her employee were there to hand the ice cream to the customer. So, she could wholesale her vegan or sheep’s milk products to any market or store, but if she wanted to sell cow or goat dairy products in those same places, she would have to rent and staff her own retail space there.

Consider this: Berthiaume could sell her dairy products from her own retail window at 571 Gladstone, but couldn’t sell them in the retail fridge in the Red Apron at 564 Gladstone — which literally is across the street. Somehow, in crossing the street, they became unsafe to sell.

By the start of 2021, in the deepest days of her annual slow- season, Berthiaume shut down entirely and “took a sabbatical to re-organize and basically lick my wounds and start over,” she says.

“This caused a lot of trauma to my small business, to my family and it was really hard to navigate this. It was quite the learning curve.” 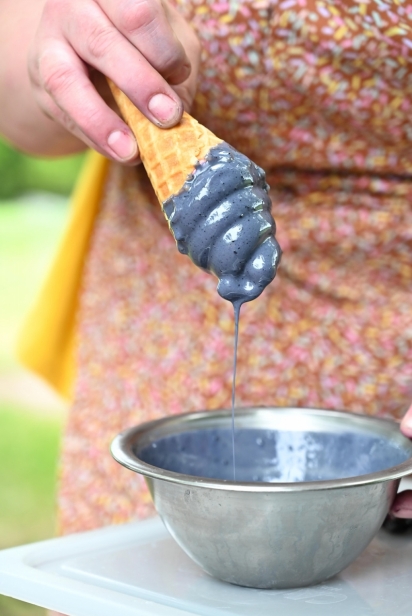 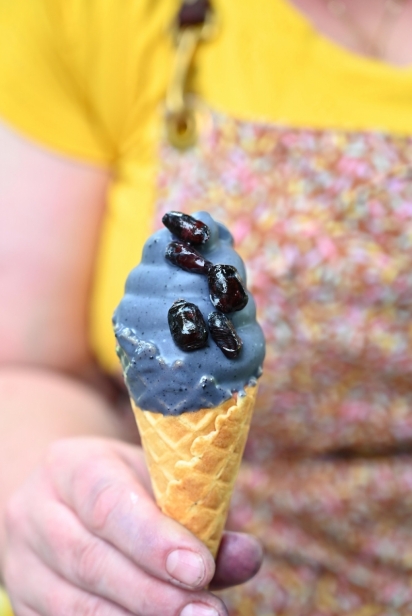 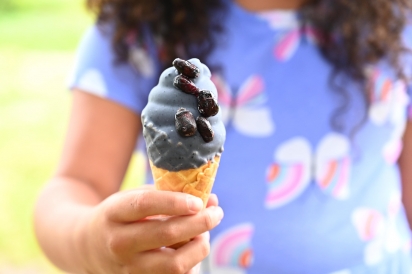 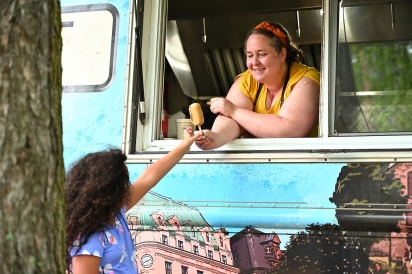 The small-business effect
Experts are studying how government regulations in Canada seem to favour large-scale producers while imposing eyebrow-raising requirements onto the smallest producers.

Amy Proulx has a combined PhD in food sciences and human nutrition and has worked for the United States Department of Agriculture, Agriculture and Agri-Food Canada, and the Canadian Food Inspection Agency. Proulx joined the faculty at Niagara College 10 years ago because, “I kept going back to the fact that we haven’t done enough as a food country to focus on the learning practice. How do we teach people to be members of the largest manufacturing sector of our country?

“We’re doing a mediocre job of teaching it in a meaningful way that allows workers to be successful and allows them to go and innovate and make those new products that really define our culture and our taste of place.”

As the lead developer of the federally funded Canadian Food and Wine Institute Innovation Centre, a position she held until 2018, she “got that reputation of all these small businesses picking up the phone and calling me... I go to bat for many of those small businesses which were then facing regulatory challenges.”

She agrees that Berthiaume’s case raises serious questions about the sale of dairy products in Ontario.

“She can take it off-site and sell it under her own name at the market downtown, but she can’t walk it across the street to another facility?

“How is the risk matrix changed in that product? That’s really the key question, and so from a small-business perspective, it’s somewhat illogical that they’re not thinking on a risk-oriented basis. So the licensing is not about risk-based activities within the food manufacturing sector; it’s really about control.”

Control to whose benefit?

“Not to the small businesses, that’s for sure,” she replies. “One could argue that it’s control for the large conglomerates. Large conglomerates are the ones who have the lobbying power to be able to influence how policies and regulations are defined in the government. Small businesses don’t have that voice.”

Proulx, who recently co-authored a report for Agriculture and Agri-food Canada on how regulations are negatively affecting the small- and medium-sized businesses that are the majority of Canada’s food producers, has reached out to the provincial agency OMAFRA on Berthiaume’s behalf. She got no response, “or if they did respond to me, they’d say, ‘please refer to the regulation.’ That’s not useful.”

Edible reached out to OMAFRA to ask how its rules on cow and goat dairy production affect small businesses such as Berthiaume’s and has received no reply as of printing.

Proulx thinks regulators have warily developed “this almost litigious and liability-centred practice and they won’t give advice.” She stresses that the safe production of food is “absolutely foundational,” but advises people like Berthiaume to boldly and clearly show government officials how those rules are impeding small business.

“Be bold enough to step up and not just cave, but find your allies and advocate for this,” Proulx says. 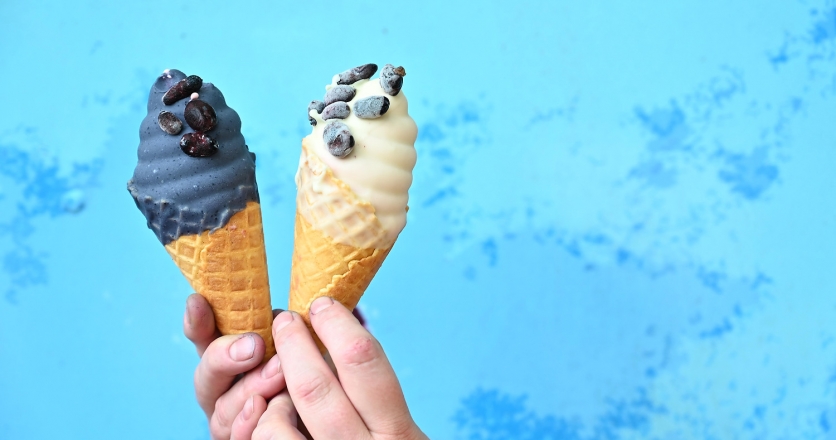 The fight for common sense and fairness
Berthiaume is determined to fight for common sense and fairness. “I’m trying to send a clear explanation to people without making them feel like I’m a rebel,” she says. “I’m just an honest, small ice cream business. I’m not opposed to them imposing rules on me, but it’s just so onerous it doesn’t make sense.

She looked into working with a licensed co-packer, but those companies restricted her to ingredients she doesn’t want to use. “In the end, it would have ended up tasting like Breyers (an ice cream made by the global conglomerate Unilever) and that’s not what I’m trying to produce. I’m trying to produce something small-scale.”

She says it would cost her hundreds of thousands of dollars to get to where she could produce cow and goat dairy products for wholesale again, so instead she’s focused on selling her products online, for pick up. OMAFRA dictates that she can retail her products on her own website, but cannot sell the identical products online at, for example, Burrow Shop, an Ottawa-based online market for local food products. She temporarily shut down her online sales when she took a sabbatical in January of this year.

“Until I can investigate more and build on my property, I will be operating seasonally at a very small scale, exploring popups, trying to reduce my overhead until I can get back on my feet and figure things out. It’s been really traumatic and it sucks — it still sucks — but at least I was able to navigate through this.”

There is an upside for Berthiaume, and it is rich in irony. The provincial rules have forced her to focus on vegan ice creams and sorbets, and that has allowed her to “stay ahead of the vegan movement, the dairy-free movement,” she says. “People are raving about it. It’s vegan, but it’s still tasty, right? And that’s what I’ve always tried to do, to make the really rich and unctuous, delicious treat.”

She told a friend who owns a dairy farm how she has “produced two tons more dairy-free product this year, and I’ve produced (far less) cow dairy this year because of new regulations, and I’m kind of molding my business around that, and he was obviously very upset.”

Promoting dairy-free competition is not, one can safely assume, the intention of Ontario’s dairy regulations.

Register for Our Newsletter

Register for Our Newsletter

see all
Article from Edible Ottawa at https://edibleottawa.ediblecommunities.com/food-thought/screaming-over-ice-cream

Fresh, Local and In Your Inbox